There’s a great deal of buzz these days around newer cloud, mobile, social, analytic and Big Data workloads whose storage requirements are causing IT managers to re-think storage infrastructure. But what about the more traditional workloads like transaction systems, email, supply chain, HR, and virtual servers? According to the most recent IDC Worldwide Quarterly Disk Storage Systems Tracker , IT managers continue to spend more on traditional SAN storage – the infrastructure of choice for these workloads – than on NAS, IP SAN and direct attach arrays combined. With over half of the worldwide spend on external storage in play, there’s a lot of efficiency to be gained. IBM Spectrum Virtualize is software defined storage that can deliver twice the efficiency on existing SAN infrastructure. 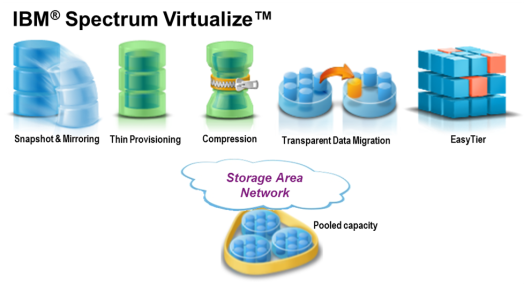 In every geography of the world, across every industry and size of enterprise, there are IT managers who have built SAN storage infrastructures with EMC, or HP, or Hitachi, or IBM, or any of a number of other vendors, but who have also software defined those infrastructures with IBM Spectrum Virtualize and are enjoying extraordinary benefits. It’s really not very complicated to understand where the savings come from.

When you choose to software define your SAN infrastructure with IBM Spectrum Virtualize:

If you are an IT manager responsible for traditional SAN infrastructure, consider the common functionality, management, and mobility across heterogeneous storage types that can come from software defining your SAN.

And join the conversation with #IBMStorage and #softwaredefined

For years, enterprise datacenters have been dominated by traditional disk arrays, things IDC’s Worldwide Quarterly Disk Storage Systems Tracker would categorize as High-end and Midrange disk. Now, I don’t have anything against this kind of storage, in fact my company makes some of the most competitive offerings in these categories. But my last two posts Introducing IBM Spectrum Storage – Inside Perspective and IBM Spectrum Scale – Built for Efficiency, Optimized for Speed have centered on the idea that a shift is being forced by the scale, performance, and cost requirements of workloads like cloud, analytic, mobile, social, and Big Data.

The storage industry needs a new way of doing things that utilizes much lower cost common building blocks with almost unlimited increments in scalability. I’m going to stay on that theme one more time as we talk about IBM Spectrum Accelerate, software defined storage that can help you construct enterprise storage in minutes.

The kind of datacenters being built by both enterprises and the public cloud pioneers for newer workloads are filled with much lower cost common building blocks. Imagine fields of identical computers each with some internal disk capacity. Cloud management software based on OpenStack dynamically schedules workloads onto hypervisors across this field of capacity. Workloads appear, storage is allocated, virtual networks are configured, workloads are dynamically scaled and relocated for optimization, and then they disappear when all the work is complete. This environment is hostile to the relative rigidity of traditional SAN storage. And yet it depends on many of the enterprise storage capabilities that SANs have matured over the years.

The genius of IBM Spectrum Accelerate is that it takes the complete set of enterprise storage capabilities available on one of the industry’s most competitive High-end disk arrays, and enables IT managers to leverage it on common building block hardware. You see, if you were to pull back the covers on the IBM XIV storage system you would discover that the forward-thinking engineers who architected it understood the demands that these newer workloads would bring. Inside the XIV you would find common building blocks – computers with disks – and intelligent software managing them.  IBM is the first company in the industry to extract intelligence directly from its traditional storage hardware products enabling clients to use it as software.

For robustness, each logical partition is stored in at least two copies on separate building blocks, so that if a part of a disk drive, an entire disk drive, or an entire building block fails, the data is still available. Since all resources in the grid are evenly utilized, all resources are engaged in quickly getting the system back to redundancy following a failure. If after the initial deployment, the IT manager wants to scale capacity, Spectrum Accelerate software can be deployed in virtual machines on additional building blocks. When the new building block joins the grid, data is automatically redistributed to maintain optimal use of resources. And this software defined storage system, deployed in minutes, includes all the enterprise storage capabilities IT managers have come to expect – thin provisioning, writable snapshots, synchronous and asynchronous replication with consistency groups, and failover/fail back.

If you are an IT manager, consider the rapid flexibility and potential cost benefits of this software defined approach to constructing enterprise storage.

And join the conversation with #IBMStorage and #softwaredefined

My Tweets
Follow The Line — by Ron Riffe on WordPress.com